In 1878 Henry Pike (1837-1904), son of a Dorset butcher, arrived in South Australia with his parents. A carpenter, joiner, undertaker and builder, he first worked in Mount Barker, and then came to Oakbank, where he worked for Johnston’s as a carpenter and cooper.

His mother taught him the art of brewing, and as a hobby he made a few gallons of ale which was so popular with his friends that they persuaded him to make some more. That was the start of the Dorset Brewery, in 1885.

Henry Pike owned lots 38 and 39. In 1886 be built the brew house, the different roofs suggest it was built in stages before the 4-storey brick and stone brew house building in 1889.

The Dorset cottage and shop, the former Pike residence was built in two parts, the original 4 rooms built of double solid brick construction on stone foundations, circa 1890. Later circa 1900 4 more rooms were added with a connection hallway. The lofty pitched roof and high front gable both compliment the overall architectural presence.

Today the 4-storey building is a significant and noble reminder of earlier 19th Century Architecture, built in bluestone and sandstone with brick string and quoins with a louvered crested lantern and weathervane above a hip roof. The beams, joists and upright posts are oregon, the floors are wide and thick wood, tonged and grooved. In the former cellar, the beer runs, which hold the kegs in place, are still there. The hot tub for brewing beer by the gravity feed process is still in place, supported by heavy beams on the second floor and reaching the third floor. The original wooden louvered shutters protect the top storey which once held the settling tank. The lower set of curved double wooden doors lead to the syrup-mixing room.

The ground floor with its stone walls reaching a height of 67cms, the walls being 48cms thick, above which the walls are iron clad, and timber lined, packed with sawdust for insulation. The timber ceiling is also lined with sawdust.

Interestingly enough Henry Pike’s original workshop is still located at the end of the building, the syrup-mixing room is parallel to the workshop, and approximately the same width. The original mixing stand is at the northern end. Between the exterior south wall of the room and the boundary is a 30ft deep bricked well, with spring water, used in the brewing process and later one of the wells used in their soft drink manufacturing business.

Operated as a brew house with Henry Pike and his wife Emma, they had two sons, Walter Henry and Edwin Francis, and three daughters, Louise (Way), Eugenie (Donavan) and Virginia (Love) lived in the residence on the front, to be the home also for later of Pike family members/generations.

The Dorset Brewery in 1886 had three principals, “Pike, Son and Beasley”. The son was Walter Henry and Ernest Albert Beasley was Henry’s son in-law. This was later changed to H Pike and Co Ltd.

The front residence offers 8 rooms, two rooms of which have been used commercially, Dorset Cottage and shop. In the early days two rooms leased to the Bank of Adelaide and Bank of South Australia, later the Oakbank Post Office, then for many years as an Antique Shop.

In essence this notable property has had only two dedicated ownerships in the last 135 years. The views from the top storey of the brick and stone brew house are absolutely stunning and extend right across the vast Onkaparinga Valley through to the Mt Lofty Towers.

The Dorset Brewery still with the Pike weather 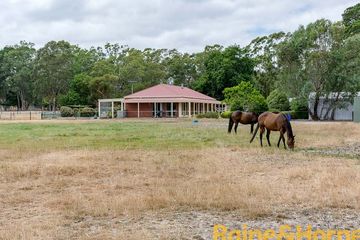