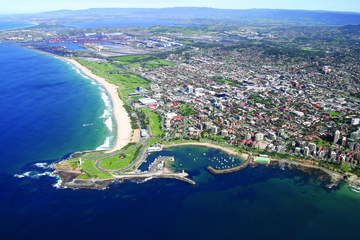 Wollongong is noted for its heavy industry, its port activity and the quality of its physical setting, occupying a narrow coastal plain between an almost continuous chain of surf beaches and the cliff line of the rainforest-covered Illawarra escarpment. It has churches of many denominations and the Nan Tien Temple, the largest Buddhist temple in the southern hemisphere. Wollongong has a long history of coalmining and industry. The city attracts many tourists each year and is a regional centre for the South Coast fishing industry. The University of Wollongong also has around 37,000 students and is internationally recognised.

Wollongong is filled to the brim with great activities and attractions to suit any and all lifestyles and interests. With its beautiful beaches, brand new shopping district, an abundance of restuarants, cafes, hotels and the increase of small intimiate wine bars popping up wollongong has it all.