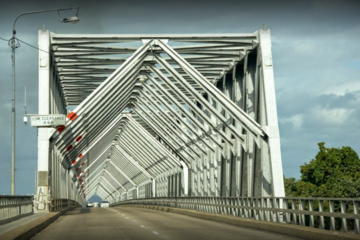 Just an hour’s drive south of Townsville, you can discover the friendly residents and laid-back atmosphere of the Burdekin. The Burdekin district is the sugar capital of Australia and is one of the most prosperous rural communities in the country. The shire’s two main towns of Ayr and Home Hill make great stopover points with great cafes and restaurants, multiple specialty stores, shady parks and excellent public amenities.

Ayr and Home Hill lie just 12km apart and are linked by the landmark Burdekin River Bridge. Also known as the Silver Link, the 1103 metre bridge is the longest of its type in Australia.

The Burdekin is becoming more and more famous for its wealth of water. Local farms are drought-proof because of the mighty Burdekin River, the huge reserves of the Burdekin Falls Dam and a massive underground aquifer which lies just 10 metres below the surface. This ‘liquid gold’ allows Burdekin farmers to produce the biggest and sweetest sugar cane in Australia, as well as mangoes, melons, capsicums, zucchinis, tomatoes and many other small crops.

By far the district’s greatest claim to fame is its fishing. The Burdekin is well-known for its barramundi, mudcrabs, other estuary species and off-coast reef fishing. The district has one of the highest rates of boat ownership per head of population and many locals have fishing huts at Ocean Creek, Plantation Creek, Groper Creek or Wunjunga.