Brisbane, Queensland (3 November, 2017) Raine & Horne Commercial announces the launch of its latest edition of Commercial Insights, a comprehensive look at how commercial property markets are faring across the nation.

Angus Raine, Executive Chairman of Raine and Horne Group, says, “Low interest rates are giving small- to medium-sized businesses a real opportunity to own their premises and enjoy security of tenure. As the asset is often held by the proprietor’s self-managed super fund, businesses can benefit from off-balance sheet financing while fund trustees have greater control of yields on their retirement savings.”

The positive impact of infrastructure

Mr Raine explains, “The impact of infrastructure on the commercial property market is not just significant, it can also be surprisingly far-reaching. Raine & Horne Commercial Erina (Central Coast NSW), for instance, is receiving enquiries from investors as far away as Western Sydney, who are hoping to capitalise on the NorthConnex project linking the M1 to the M2 in Sydney.”

In state capitals such as Sydney, strong returns on residential property have seen a number of commercial assets earmarked for redevelopment as residential dwellings.

This trend is especially notable in Sydney’s inner west and south, where values are being driven higher. As a guide, Raine & Horne Commercial South Sydney recently managed the sale of 401-405 Illawarra Road, Marrickville, achieving a sale at auction for $350,000 above the reserve price.

Commercial property is delivering varying gains around the country, and Sydney is recording particularly buoyant conditions.

Mr Raine says, “Commercial values in North Sydney are expected to rise by 15.0% for FY2017. Commercial assets on Sydney’s Northern Beaches could see an uptick in value of as much as 30.0% for FY2017.”

“Raine & Horne Commercial Brisbane North for instance, reports yields of up to 7.5% for A-grade industrial assets. High-quality office/commercial property is generating yields between 7.0% and 7.5%.”

Yields are being driven further by vacancy rates, which are at near-record lows in a number of markets.  Mr Raine notes, “Vacancy rates in Melbourne can be as low as 2%, and this is giving reassurance to investors looking for income-generating assets.” 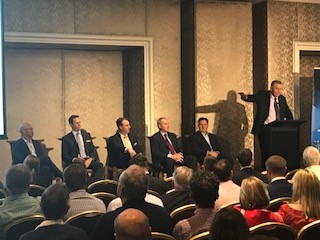 Raine & Horne Commercial will launch the latest edition of Commercial Insights on 2 November at Brisbane’s Stamford Plaza. The launch will be hosted by Ray Hadley, OAM, broadcaster on Radio 2GB Sydney and 4BC Brisbane.

A second Commercial Insights seminar, also hosted by Mr Hadley, will be held on 9 November 2017 at the Westin Hotel, Sydney.