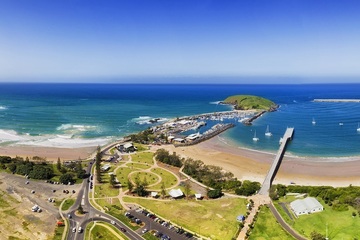 Coffs Harbour, NSW (3 June 2018) The greenlight by the Federal Government in this month’s budget for the long-awaited $971 million Coffs Harbour Bypass on the Pacific Highway will prove a significant win for property owners in the popular NSW coastal town.

“This is an excellent announcement for Coffs Harbour. We've been lobbying for the bypass for about 30 years. It's been a long time coming,” said Christine Clarke, Principal of Raine & Horne Coffs Harbour.

The two-lane Pacific Highway currently travels through the centre of Coffs Harbour, making the town a major hub for people journeying from Sydney to the Gold Coast, or further north.

Ms Clarke adds, “Coffs Harbour is currently the last bottleneck left of the Pacific Highway, so the bypass will get a lot of heavy traffic away from the town.”

Contrary to some opinions, a road bypass is not equivalent to signing a town’s financial death notice, stated Ms Clarke.

“When Port Macquarie and Taree were bypassed, some critics claimed, ‘That'll be the end of the town,’” she said. “Neither of those towns went broke because they were bypassed.”

For the Coffs Harbour property market, Ms Clarke says the bypass won’t have a wide-ranging impact on values immediately.

“Certainly, some owners with property along the highway will see a change in values,” Ms Clarke said.

“At the same time, there might be some owners on the outskirts of the town, who now face the prospect of living closer to a major road.

“Overall, the bypass will be good for business, create employment opportunities, especially during the construction phase, and as a consequence will create more demand for Coffs Harbour real estate.”

For all your real estate sales and property management needs in Coffs Harbour, please contact Raine & Horne Coffs Harbour on 02 6652 1066.