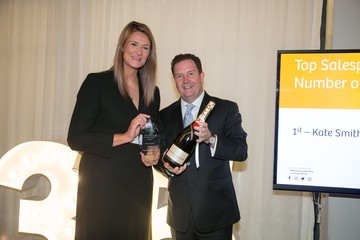 A major event for the real estate industry in South Australia, the annual awards combined as a celebration of Raine & Horne’s 135 years of commercial operation, attracting around 150 of the group’s best and brightest sales agents and property managers.

A reigning Real Estate Institute of South Australia (REISA) category winner and former basketball ace with the Australian junior team, the Gems, Ms Smith, was named Raine & Horne’s best sales agent in South Australia based on the dollar value of her sales, and the number of sales in 2017. Ms Smith is also the leading real estate group’s best auction lister.

In a busy and successful night for the indefatigable Ms Smith, the Principal of Raine & Horne Semaphore also scored first places in the Top Salesperson (Principal) categories for the number of sales and the dollar value of her sales. Paul Dean, the Principal of Raine & Horne Victor Harbor, pushed Ms Smith firmly, ultimately finishing second in the principal sales categories.

Angus Raine, Executive Chairman Raine & Horne said, “I am very proud of Kate’s efforts in winning these awards, and her achievements are particularly pleasing considering the average sales price in Semaphore is just $427,950, and she is competing with agents operating in Adelaide’s higher-priced city and eastern suburbs markets.

“Auctions as a method of sale are gaining increasing traction in Adelaide, and Kate is at the vanguard of under the hammer selling. Her embrace of auctions to deliver the best possible results for her vendors is helping set Kate apart as an agent in Adelaide.

“Not only is Kate a dominant selling force in Adelaide, but we expect she will put the heat on some our big offices and leading sales aces in Sydney and Melbourne when our National Awards are announced in July.”

Highlights from the 2018 Raine & Horne South Australia Awards for Excellence: