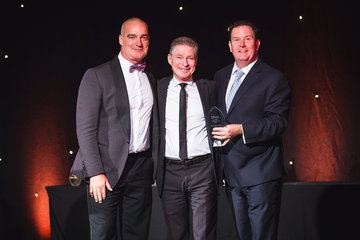 The Eastern Suburbs-based real estate firm, which offers a complete suite of residential and commercial sales and property management services, trounced 700 entries from across Australia to win the prestigious award, which is judged by an independent panel of 80 industry experts.

The judging panel is chaired by Lord Caithness, Lord Best, The Earl of Liverpool, and Lord Thurso, who are all members of the House of Lords in the UK Parliament. Judging focuses on design, quality, service, innovation, originality, and commitment to sustainability.

“May I take this opportunity to wish [Raine & Horne Double Bay] congratulations on this fantastic achievement, particularly in Australia where the standard was so high,” said Stuart Shield, President, International Property Awards.

The International Property Awards (IPAX) are in their 25th year and cover over 45 different residential and commercial categories. Regional Awards are staged for the Middle East, Europe, Africa, Canada, Central & South America, the Caribbean, USA, UK and the Asia Pacific. These awards will be presented at gala presentation events in Bangkok, Dubai, London, and Toronto during the year.

Mr Maskin, Mr Serrao and members of the Raine & Horne Double Bay team will collect the prestigious award as Australia’s best at the Asia Pacific Property Awards in association with Salice at The Marriott Marquis Queen’s Park, Bangkok on the 3rd and 4th May.

The regional winners are automatically entered in the international awards, culminating in a glittering awards ceremony, held at the Savoy Hotel, London, in December 2018.

“This is an amazing achievement for Martin, Ric and the team at Raine & Horne Double Bay who beat a very hot field of 700 entries to be named Australia’s best,” said Angus Raine, Executive Chairman, Raine & Horne.

“We have offices across the globe from Darwin to Dubai but our mega office, Raine & Horne Double Bay, located in the heart of Sydney’s Eastern Suburbs, is our jewel in the crown.

“Ric and Martin will give the regional awards in Bangkok a real shake. Moreover, a win in London in December would cap a fabulous 135th year for Raine & Horne. Raine & Horne Double Bay was our first expansion office, which coincidentally my father Max opened to much fanfare in 1969.”

Mr Maskin, who took the reins at Raine & Horne Double Bay in 2000 added, “We are very fortunate to have such a dynamic team who always works hard and strives to succeed on all levels.”

For more than a decade, Raine & Horne Double Bay has been the Superbrand’s number one office for listings and revenues nationally. The firm is also Raine & Horne’s Top Auction Office in Australia.

“Raine & Horne Double Bay is the most recommended real estate agent on agent review website, Rate My Agent for some of Sydney’s most prestigious suburbs including Bellevue Hill, Bondi Beach, Bondi, and Vaucluse,” said Mr Maskin.

“Our highest transaction in 2016 was $20 million, while the $30 million sale of a knockdown-rebuild property on the waterfront at Rose Bay was our headline act in 2017. These results are sure to have caught the judges eye.”

A personal achievement for Mr Serrao, who has been Raine & Horne’s number one principal for the past five years, and a fantastic representation of Raine & Horne Double Bay, was his invitation to present at the 2017 AREC Conference. “Alongside the best-performing agents in Australia and international guests, Ric presented his keynote: The Truthful Approach to Real Estate. His presentation was a standout at AREC,” Mr Maskin said.

Another aspect of the Raine & Horne business model that is sure to have caught the eyes of the IPAX judging panel is the firm’s commitment to diversity.

Mr Maskin noted, “Ric and I are incredibly proud of the diverse cultures of our company. Apart from English, members of our team are fluent in German, Swedish, Spanish, Russian, Greek, Turkish, Armenian, Portuguese, Hebrew and Korean.

“The Eastern suburbs market is recognised nationally, so it’s pleasing that we can cater to international buyers and investors from across the globe.”