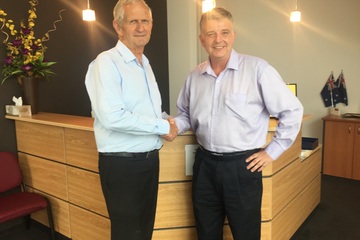 According to data from Raine & Horne Ellenbrook, up to 40% of buyers are first home buyers, although Mr Abbot said that there is a good proportion of rural downsizers shifting to the fringe Perth suburb. “It's not just the young families who are moving to Ellenbrook,” he said.

“Since Ellenbrook is on the outskirts of the metropolitan area, you're also getting country people from the land seeking to downsize to a 500-800 square metre block. So, Ellenbrook caters to a couple of different types of property demographics.”

Mr Lyster attributes his decision to join Raine & Horne to his developing relationship with the group’s senior executives. Mr Abbott provided the newest Raine & Horne principal with some advice about the management of his rent roll. “I liked Craig’s approach and the decision to switch to Raine & Horne developed from there”.

“He’s given me a great insight into Raine & Horne, which is significant real estate brand on the east coast of Australia and is now making more inroads in Western Australia.

“I believe that opening a Raine & Horne office will be a good move as it will provide a fresh approach to real estate for the Ellenbrook area, particularly with the group’s focus on cost-effective digital technologies and social media marketing.

“My final decision to switch allegiance was made after I met Raine & Horne CEO Brian Reid, who is very down to earth. Brian’s approach impresses me as it’s not hierarchical.”

Mr Lyster said that Ellenbrook’s affordability is attracting first time buyers. “It’s possible to buy small blocks from 400 square metres for around $200,000, while established homes are selling for about $400,00,” he said.

“Ellenbrook locals can find work opportunities close by in suburbs such as Midland, Wangara and Bullsbrook, while the Tonkin Highway extension, which is underway will reduce commute times to Perth significantly.

A proposed train station connecting the suburb to Perth would also be good news for those considering Ellenbrook real estate, said Mr Lyster.

“This proposal has been bandied around for many, many years, and it would be good to see the government make a train station at Ellenbrook happen.”