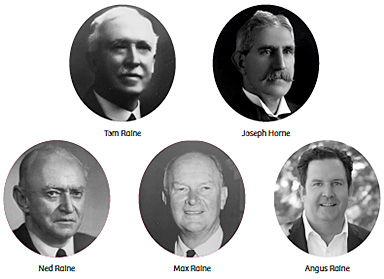 Since opening our doors back in 1883, Raine & Horne has been at the forefront of the Australian real estate scene and the only recognised Superbrand.

Raine & Horne has had a long association with Australia’s agricultural industry; it traces right back to 1814 with the arrival of Captain Thomas Raine in Sydney.

As a confidant of Governor Lachlan Macquarie in 1824, Thomas was granted land near Bathurst and built the well-known district manor ‘Rainham’ in 1832. In the years that followed Thomas Raine expanded his holdings to the west, establishing the extensive ‘Boree’ run which is near present-day Orange. During this time, he also oversaw the development of wheat and dairy farming as well as cheese production and the establishment of the regions first flour mill.