The sale at auction of a 4-bedroom family home in Baldivis[i], south of Perth, for a price above the reserve, is one of several strong signs the local real estate market is starting to lift. 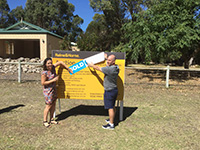 “The auction attracted 4 registered bidders and up to 90 interested parties,” said Patrick Holmes of Raine & Horne Rockingham Beach, who sold the property with his colleague Louise Dickenson.

“Six months ago, we would have only about 10 people at an auction in Baldivis,” said Mr Holmes.

In another encouraging sign for the property market, the auction result followed 7 vacant land sales in the past week, which was the highest weekly number of land sales in more than a year. Eleven houses were also sold during the week.

“There is life back in the market, which is an indication that people are discovering that Baldivis is one of Perth’s best-kept secrets,” said Ms Dickenson.

“It’s about 40 minutes from Perth by car, it has a railway station, and values are still very affordable, with a median house price of $445,000 compared to Perth’s overall median dwelling price of $475,000.”

Baldivis is well served by infrastructure, having undergone rapid expansion making it one of the fastest-growing suburbs in Australia in 2017, according to the Australian Bureau of Statistics[ii].

“The centre of Baldivis is a happening place, with a modern Stockland shopping centre, medical and dental facilities, a gym, cafes and pub,” said Mr Curran.

“It’s this combination of factors and amenities, along with the quality build of the house that attracted the big numbers to the auction including the winning bidders Marie and Glenn Foster.”

The 4-bedroom family home, located at 24 Oak Way, Baldivis, is built on a generous 3009-square-metre block. It has two bathrooms, a games room, study, formal and informal living areas, a below-ground pool and a gable patio with pizza oven.

“It’s great to see interest back in the Baldivis market, after the challenges of the past few years,” said Mr Curran.