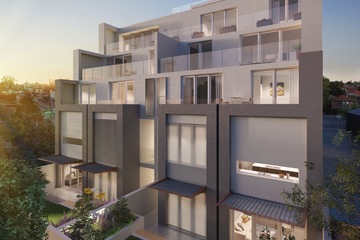 In just three weeks after the launch, Raine & Horne Projects managed a highly successful campaign which resulted in all of the required presales being made on behalf our developer client’s. In fact we have ended up with a surplus of buyers wanting to buy in to the project.

The Fernhill Apartments ‘off the plan’ campaign ran over two stages. The first stage was a pre-launch promotion which led to several sales being made directly from the Raine & Horne Projects database. Buyers were able to inspect the display suite, allowing them to view floor plates, CGI’s, finishes and brochures during the pre-launch and book an appointment in hope of securing an apartment on the launch day.

On the launch day there was an influx of over 200 buyer enquiries and 35 presentations. Each buyer was accommodated by the Raine & Horne Projects Team. Interested buyers on the day were able to secure their ideal apartment whilst others were databased and contacted throughout the campaign leading to further sales.

Over the remaining 2 – 3 weeks, Raine & Horne Projects marketing campaign and behind the scenes sales activity and momentum resulted in over 300 buyer enquires and 80 presentations